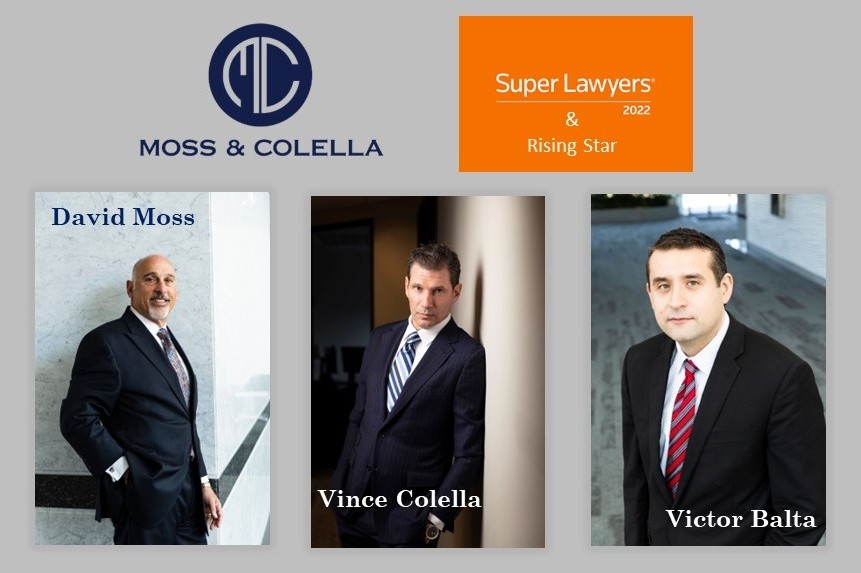 Southfield, Mich.---August 12, 2022 ---David M. Moss and A. Vince Colella, personal injury attorneys and founding partners of Southfield-based Moss & Colella, P.C., have been named to the 2022 Michigan Super Lawyers list, while associate attorney Victor Balta has been awarded the Super Lawyers Rising Star designation. All three attorneys devote 100% of their practice to litigation.

In his 15th year on the Michigan Super Lawyers list, David M. Moss has been named in the category of Personal Injury General: Plaintiff.  He has spent his nearly 40-year legal career entirely devoted to his clients in personal injury law representing victims and their families in a variety of injury cases against insurance companies, national corporations, hospitals, municipalities, and individual defendants. Known for his courtroom and advocacy skills, Moss has successfully argued at the appellate level, both before the Court of Appeals and the Michigan Supreme Court. He is also highly respected and regarded as a skilled negotiator. Because of his many legal accomplishments and varied courtroom experience, David is sought after by both plaintiff and defense attorneys seeking to retain outside counsel to advocate their cases.

Also named in the category of Personal Injury General: Plaintiff, A. Vince Colella’s appearance marks the 12th consecutive year that he has been selected as a Michigan Super Lawyer. His trial experience includes automobile negligence, police brutality and misconduct, premises liability, trucking accidents, insurance disputes, medical malpractice, sexual harassment, sexual assault, discrimination, and wrongful death. In recent years, Colella has gained a reputation for his trailblazing litigation efforts in government liability, recreational accidents and civil rights cases. Colella is respected by lawyers and judges as an aggressive, skillful and powerful trial lawyer, and known as a compassionate and relentless advocate by his clients.

In his second appearance as a Super Lawyer Rising Star, Victor Balta has been recognized in the category of Civil Litigation: Plaintiff. He has helped guide firm clients through complex legal matters, including gross negligence, statutory immunity, employment discrimination, and police misconduct claims, and has successfully briefed and argued cases involving recreational waivers, the Michigan Governmental Tort Liability Act, the Michigan Ski Area Safety Act, Title VII of the Civil Rights Act of 1964, the Elliot Larsen Civil Rights Act, and 42 U.S.C § 1983. TheRising Star designation is granted to no more than 2.5% of attorneys in the state who are either 40 years old or younger or in practice for 10 years or less.

Super Lawyers, part of Thomson Reuters, is a rating service of outstanding lawyers from more than 70 practice areas who have attained a high degree of peer recognition and professional achievement. The annual selections are made using a patented, multi-phase process that includes a statewide survey of lawyers, an independent research evaluation of candidates, and peer review by practice area. The result is a credible, comprehensive, and diverse listing of exceptional attorneys. For more information, go to SuperLawyers.com.

Celebrating 25 years in 2022, Moss & Colella represents the victims of personal injury, civil rights violations, discrimination, medical malpractice and wrongful death.  The firm is recognized as a leader in complex tort litigation, including excess and deadly force, jail death, sexual abuse and harassment, auto and truck accidents, motorcycle accidents and other severe injury and wrongful death claims. To learn more about the firm and its diverse areas of practice, visit www.mosscolella.com.